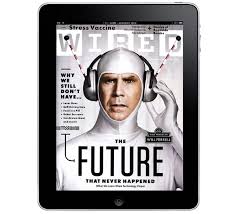 Despite the rise in the number of digital magazines, ad pages continue to decline in this medium. And D. B. Hebbard in Talking New Media has some ideas as to why.

One of these is a trend that Hebbard noted back in 2010, “that the drive to create new digital products is mostly being initiated by the editorial side of things, with advertising playing catch up,” he writes.

“Few magazine publishers delayed creating their digital editions until they had new commitments for tablet advertising. Instead, many publishers saw tablet editions as a way to maintain their rate bases, and created hybrid editions where the print ads were reproduced pretty much unchanged in their digital editions, while they reformatted their editorial content for better reading on mobile devices. Others created replica editions, motivated by the same goal – maintaining their rate base.”

The problem, he says, is that few agencies “embraced tablet editions as a place to create new interactive advertising.”

When publishers began to create digital versions of their print publications, there was little collaboration in advance with the advertising side of things. Purists may cringe at the suggestion that editorial and advertising work together, but when creating an entirely new medium, advertising must be part of the discussion.

“Many publishers are beginning, reluctantly, to realize that they have made a big mistake by seeing the creation of new digital media products as mostly an editorial concern,” continues Hebbard. “The new NYT Innovation Report, for instance, specifically lists improved collaboration between editorial and the business side as one of its recommendations.”

Hebbard does note that the report takes a caution tone on the issue, knowing that this kind of collaboration is fraught with pitfalls to many traditional journalists. Still, he reminds us that advertising is a critical component of the digital magazine experience, and must be approached early in the process.

“Publishers foolishly thought that if they built it they (advertisers) would come. They didn’t. This remains a part of the problem, maybe the biggest part,” Hebbard states.

He’s not saying that advertising should drive the editorial content of any magazine, of course. But in the reimagining of magazines as a digital medium, the advertising platform must be taken into consideration.