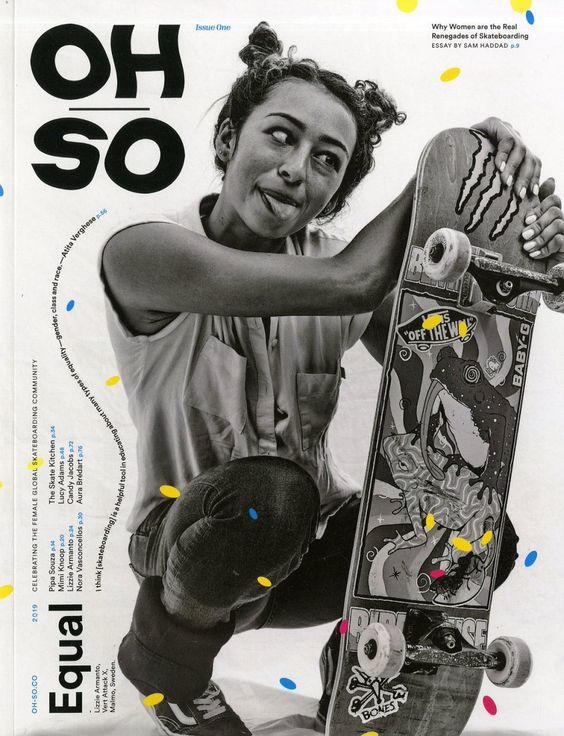 The slow-down factor. That’s the real beauty behind Oh-So, a magazine dedicated to females in the world of skateboarding.

“ … hopefully, whoever sees it; it gets them to slow down and reflect on the fact that they may have seen so much stuff on Instagram, but barely remember any of it.”

That’s the explanation publisher Rob Hewitt gives to Samir “Mr. Magazine” Husni on why he publishes Oh-So in print, not digital. It’s an intentional push-back from the frantic, transitory pace of social media and how content in this genre is typically consumed.

“I feel like on Instagram and on the web … you kind of move so quickly and you forget so quickly about what it is exactly you’re documenting in the back of your brain, where a true visual and visceral experience, especially with skateboarding where there is so much movement that you hardly get to reflect on the person’s face and personality because it’s all about the trick and what’s being done on the board, I really wanted to slow that down and pull back a little bit,” Hewitt told Husni.

That slower pace doesn’t mean it loses any the vibrancy of the sport. Just the opposite, in fact.

“From the fun and energetic design to the fantastic illustrations and stories that fill its pages, Oh-So definitely lives up to its name,” Husni writes, continuing “it’s oh-so engaging and informative. And with the tagline ‘Celebrating The Female Skateboarding Community,’ the magazine shows the renegade spirit and talents of the female skateboarder, but also tells the story of their individual journeys. And it shows the passion of a true graphic artist [Hewitt].”

There’s a magic that happens in these small indie titles when the subject matter is incredibly important to the creator. And in this case, Hewitt gives all credit to his daughter Amelia for inspiring Oh-So. Even at the young age of seven, Amelia had a passion for skateboarding and was driven to learn more about other girls in the sport. But there was precious little on the newsstand to satisfy her curiosity.

“What’s next is working on the second issue,” says Hewitt. “I’m very excited, there is some really good stuff. I don’t want to jinx it but Issue One has been received really well, and I honestly don’t know what to think because I entered into this thinking that I had nothing to lose, it could just disappear and that’s fine, I need to stay true to my journey and my focus. And I’ve done that. And people have reached out and said great things.”

Those great things are well-deserved, and we wish Oh-So all the best as they grow.

In our continued commitment to color management, Freeport Press is proud to announce that John Stewart,...