Deadtreeedition’s recent post on LL Bean promoting paperless to keep the world green is right on. It represents the misconceptions of going paperless.

In my opinion, the green LL Bean is referring to is the color of money. I think Kathi Rowzie, with The Gagliardi Group, said it best in a recent post, “Note to corporate America:  If you want to promote the use of electronic bills and statements to reduce your costs, have at it.  But drop the green smoke screen.  Your customers will appreciate the honesty … and so will the FTC.”

It’s A Case of L.L. Beanwash

The L.L. Bean brand used to connote squeaky-clean business practices with a heavy dose of earth friendliness. No more.The venerable outdoorsy Bean brand is now connected to a rather egregious greenwashing effort – a crude attempt to squeeze extra profits by making unfounded environmental claims.“Go Paperless and help keep the world green,” advises a recent promotion to holders of L.L. Bean Visa cards. “Paperless statements are . . . better for the environment. Eliminating paper statements conserves trees and energy,” advises an email, without providing a shred of evidence or even a link to anything backing up the claim. 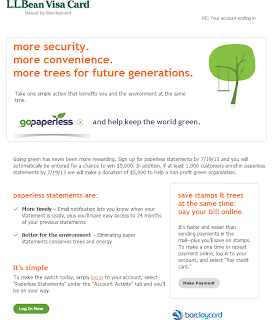 The real culprit may be Barclaycard, the banking organization that actually issues the cards in a partnership with Bean. Barclaycard is apparently behind the promotion – and the business whose coffers would presumably become “greener” if more customers opted out of printed, mailed statements.

The Barclay bank conglomerate’s somewhat sketchy sustainability reporting provides no evidence that its digital processing is inherently more earth friendly than ink on paper. Its main response to climate change is the purchase of carbon credits to offset its 1-million-tons plus annual emissions of greenhouse gases. A fair portion of those emissions apparently were the result of its data centers, which consumed 332 gigawatt hours of energy in 2011, a 4% increase over 2010.

And what about Barclay’s progress in 2012? Read the full article @ deadtreeedition here: http://www.deadtreeedition.blogspot.com/2013/07/its-case-of-ll-beanwash.html